I have just been testing DSSR5’s rewritten scan feature. This effectively triples the area covered by your imaging chip and also completely eliminates Newton’s rings. Here is how it works on a PST – DMK21 – PowerMate 2.5x setup. 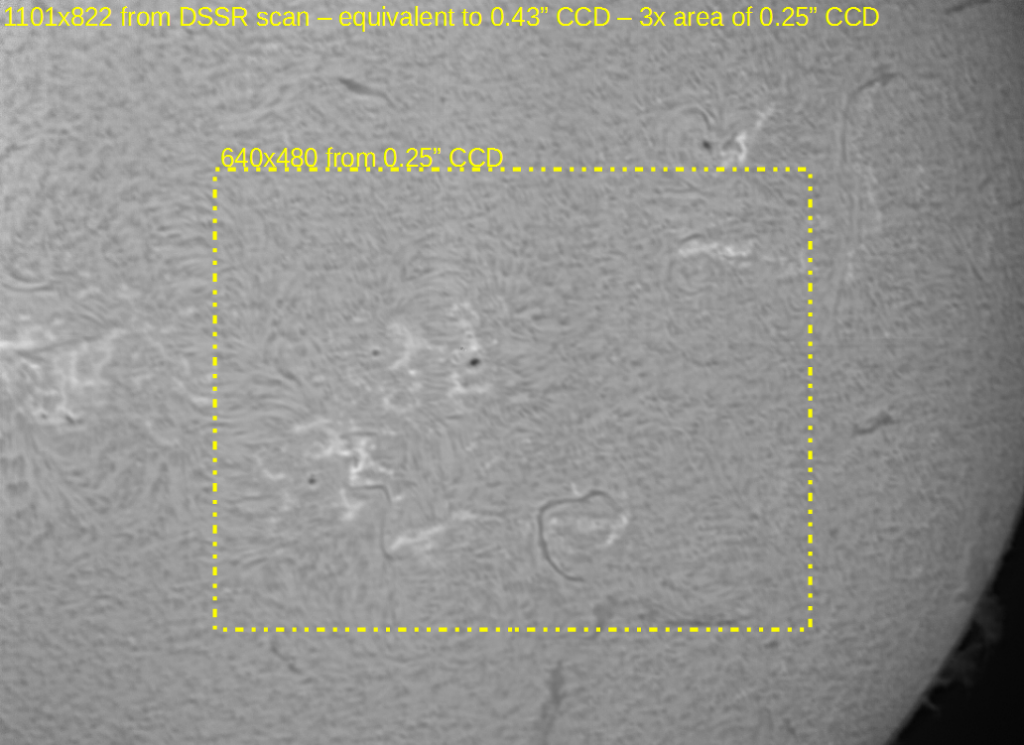 It also allows you to take full disk images of the Sun with a PST and DMK21 at prime like below. 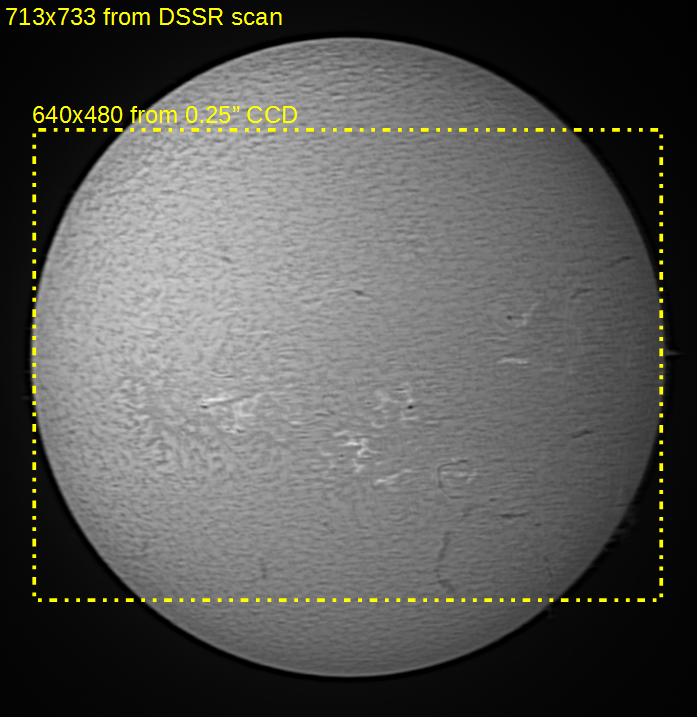 DSSR5 is currently only available to members of my user group but will be released publicly soon.

The scanner uses the same file format as DSSR captures so that DVS can automatically add the date and time like the 1123×673 pixel scan below. 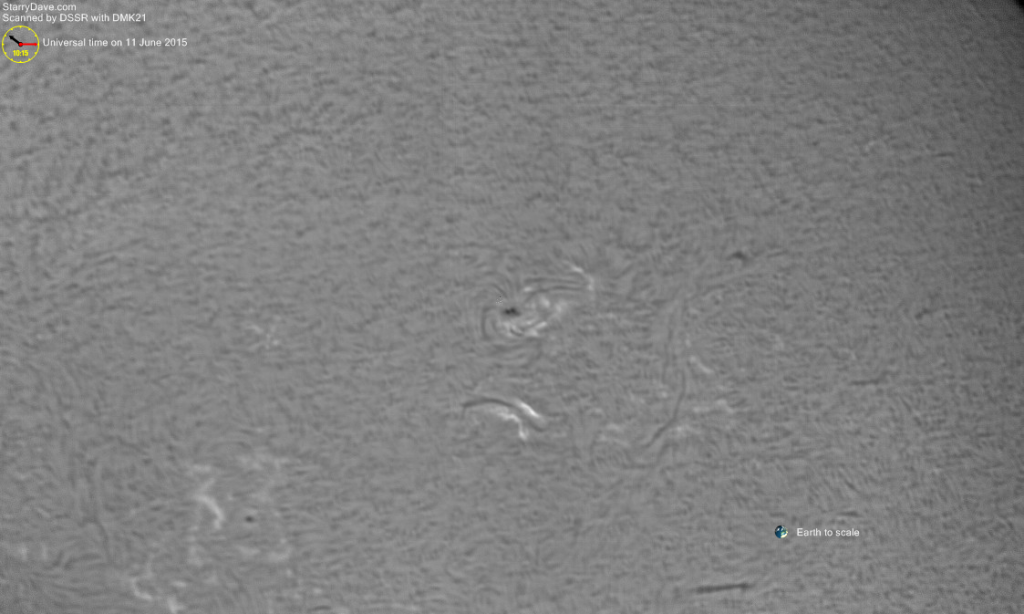 My old XP desktop in my garden observatory finally started chugging so I checked out the price of an upgrade to a newer version of Windows. Doing so, I found this little beauty which is a quad core PC with Win8.1 for a few dollars more than Win8.1 on its own. 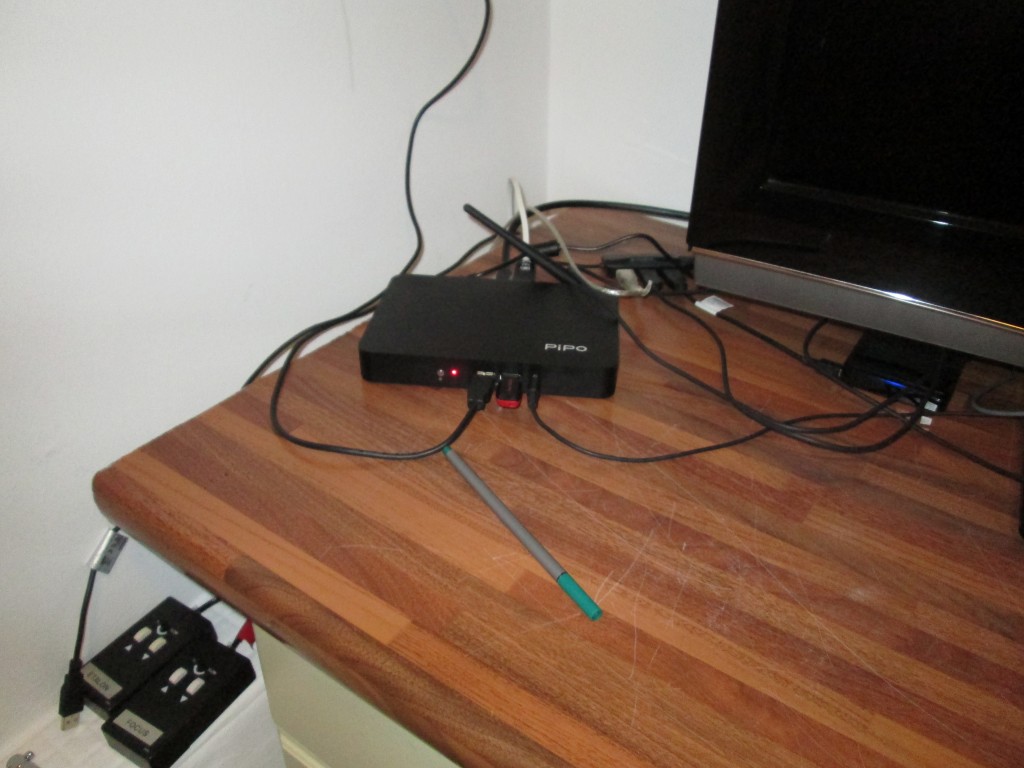 It starts from cold in 20 seconds and is very nippy because all programmes are on the SSD. Power consumption is 8W with no camera and 11W with my DMK21 attached. I can afford to leave it running 24/7 which will cost me around $12 a year. There is no fan so it is totally silent which makes it great as a media player. The aluminium case doesn’t even get warm to the touch.

It is roughly 40% as powerful as my 8-core AMD 3.1GHz, 8GB, 64bit W7 desktop PC, based on these comparison processing times:

However, the Pipo wins hands down on a bang per buck and bang per watt basis.

It runs my HEQ5 Pro and DMK21 under DSSR with no problems which is why I bought it. It can autoguide all day long while constantly capturing video clips with no dropped frames. One thing to note is that you need to be wary of how much power your devices suck from the USB ports. I have to run my DMK21 camera from a front port and a portable HDD capture disk from a rear port. A powered USB hub should solve this problem.

I added an un-powered 4 port USB hub which lets me add a mouse, keyboard and DSLR together with my EQMOD cable, DMK21 camera and 500GB capture disk.

I can see the Pipo being a lot of use in astronomy. You could strap it to your scope tripod with a battery pack (or solar cell) and control it via TeamViewer. Or, have a bunch of them running in a cupboard as a video and imaging processing farm.

Would I buy it again? I already have, and #2 is my new media PC. Netflix, YouTube, iPlayer, etc all play 1080p video without a hitch. The great thing is I can also do video or image processing on it overnight.

ps I have heard rumors than Win10 will be offered as a free upgrade to Win7 and Win8. This would make the Pipo even more of a bargain.

Here are some pics of my second observatory which is an HEQ5 Pro mounted on a small table outside my garage. The control cables run into the office in the garage corner and are stored coiled in the empty gas meter cabinet on the wall. The hardest part of making this was drilling a 55mm hole thru the wall for the cables. It only takes a minute to remove the cover bag, install the scope and connect the wires. The mount is on the south-east corner of the garage so it can cover the whole sky except the north-west quadrant. Perfect for solar, lunar and planetary work. 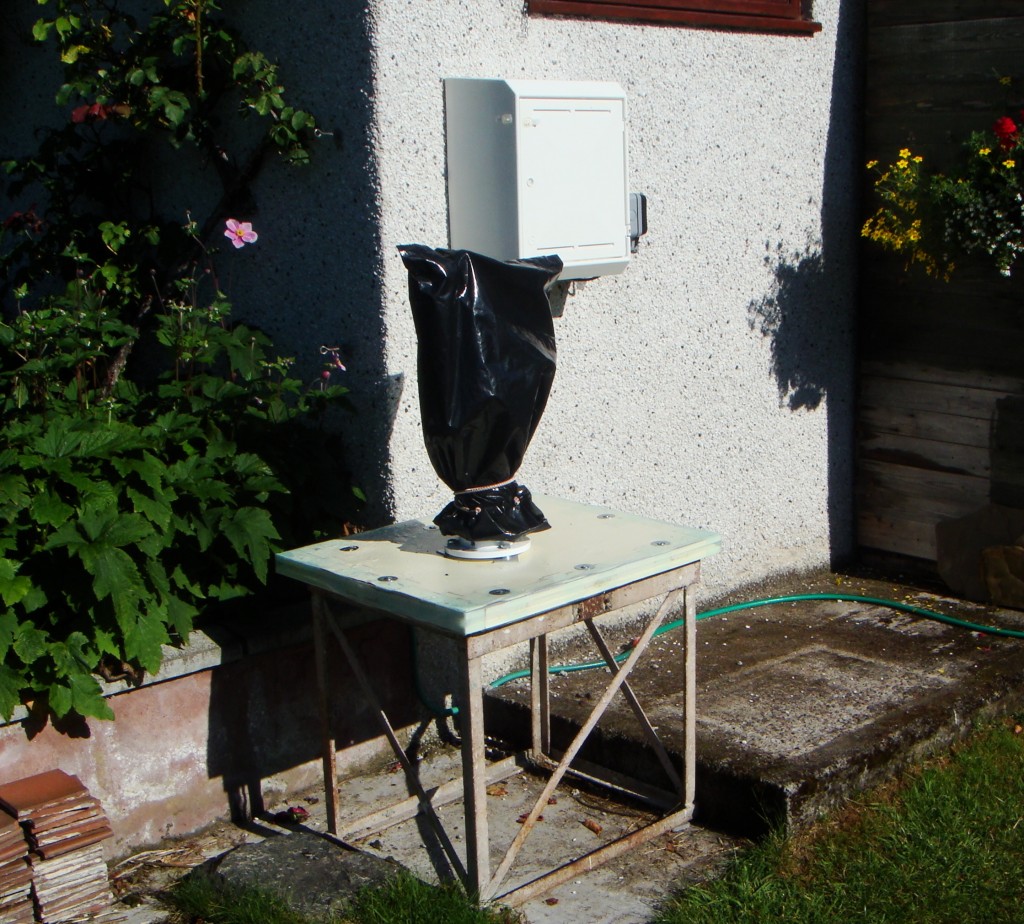 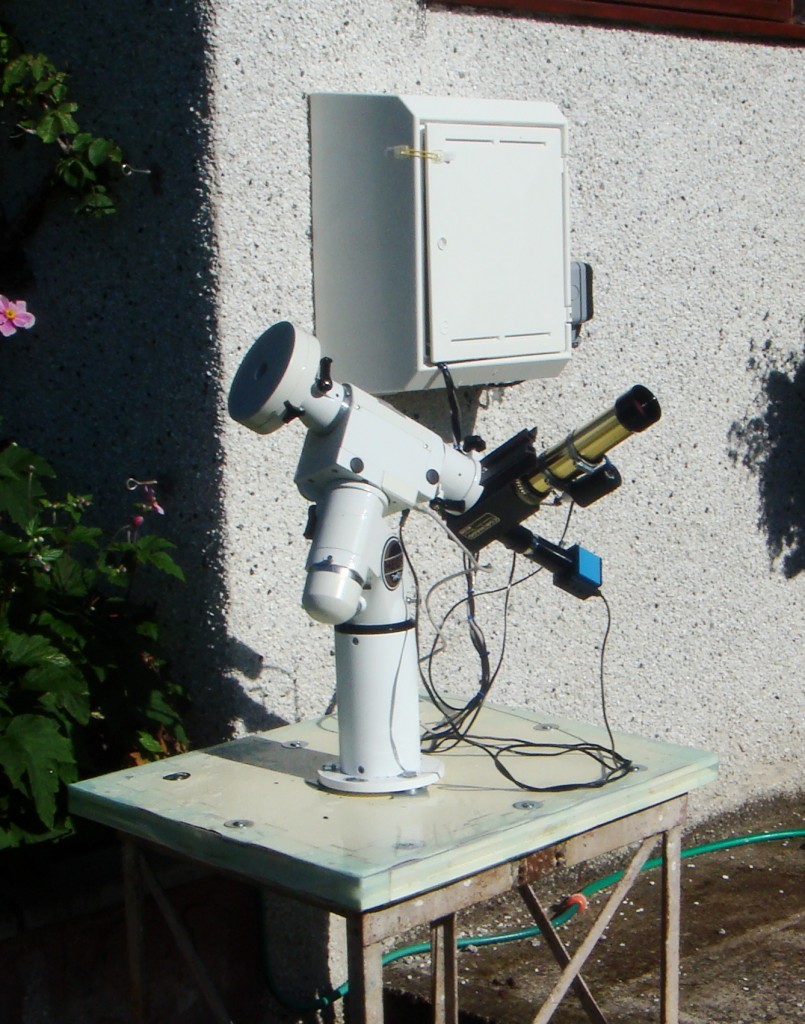 DSSR version 4.10 adds support for cameras from ZWO Company as shown in this screen shot. 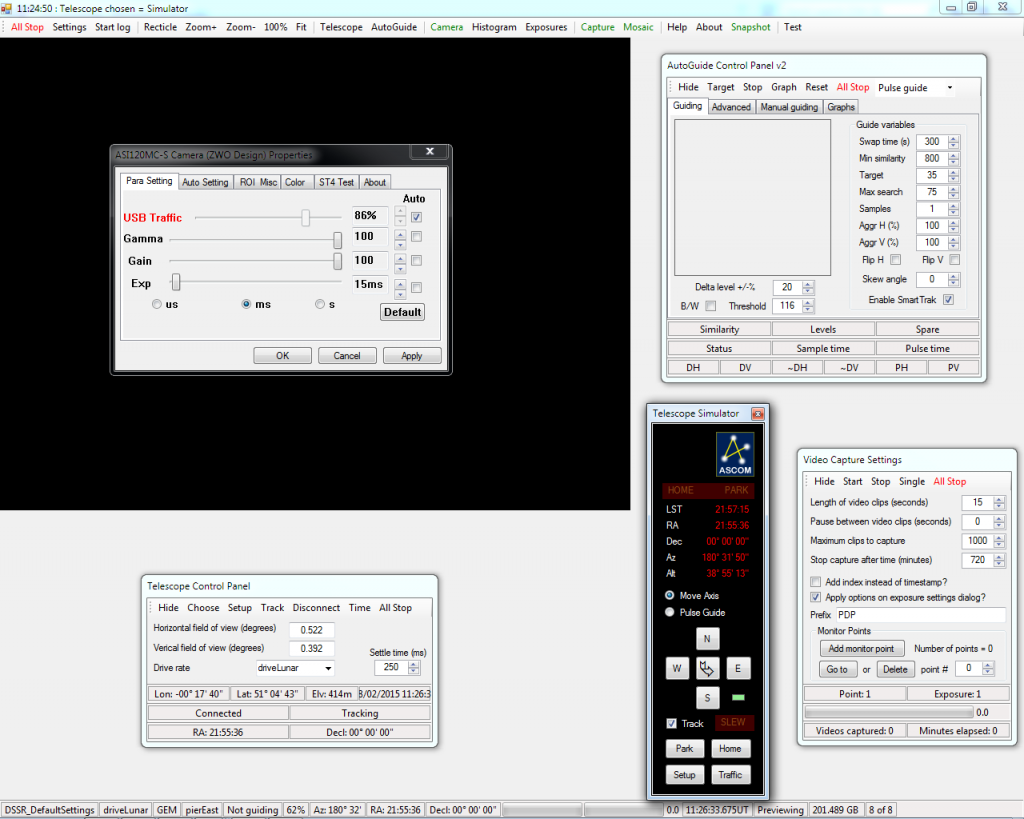 I don’t have a ZWO camera myself which is why the video screen is black, but several users have confirmed that their ZWOs display and capture fine.

This was only possible thanks to the support offered by Sam of  ZWO Company and the generous help given by Robin (author of SharpCap) who even donated some SharpCap code for DSSR. A big thanks to both of them.

DSSR started displaying error messages and even refusing to load on some PCs in December 2014. Even my garden observatory PC was affected even though no code had changed. I can only surmise that some Windows update had upset DSSR. Most errors were easy to fix and DSSR 4.10 now has a debug mode and improved error logging that help me fix any future errors.

First off, check that your Windows text size in your Windows display settings is set to the default 100%. DSSR may not start and will certainly not autoguide if it is not 100%.

Next, start DSSR and click the I Agree (debug) button. You will then see a series of boxes with a letter code like A, B etc. Click on the OK buttons and remember the last code displayed before DSSR crashed. If you get as far as the main DSSR window make sure logging is running and then write down exactly what you are trying when you see the error. Close DSSR.

You can then use my software support group to post your results together with the relevant log which should be in your capture folder. I will get back to you in a matter of minutes (or days) with a fix.

We just had some problems with new users which was tracked down to the Windows text size which can be altered in Control Panel>Appearance and Personalization>Display.

Any setting other that 100% may prevent DSSR from starting and will certainly prevent it from autoguiding.

Apparently, a lot of laptops are now shipped with 125% text size out of the box and these need to be changed to 100% before running DSSR. This will also solve problems in other software with text not displaying correctly.

If you have trouble reading text at 100% then use a lower screen resolution which will not affect DSSR.

DSSR 4.9 is now available on the Downloads page.

This version fixed a problem where the WinTrak window was not showing for some users. It also has improved error logging and the expiry date has been removed. This version should see you out.

I also uploaded new versions of DVS and DFM where the only change was to remove the expiry date.

Microsoft have just released an update to their Image Composite Editor (ICE). I gave it a quick try on my last set of lunar mosaic tiles and it looks like a much nicer package. In particular, the export to disk is now almost instantaneous. Download the 64bit version here. 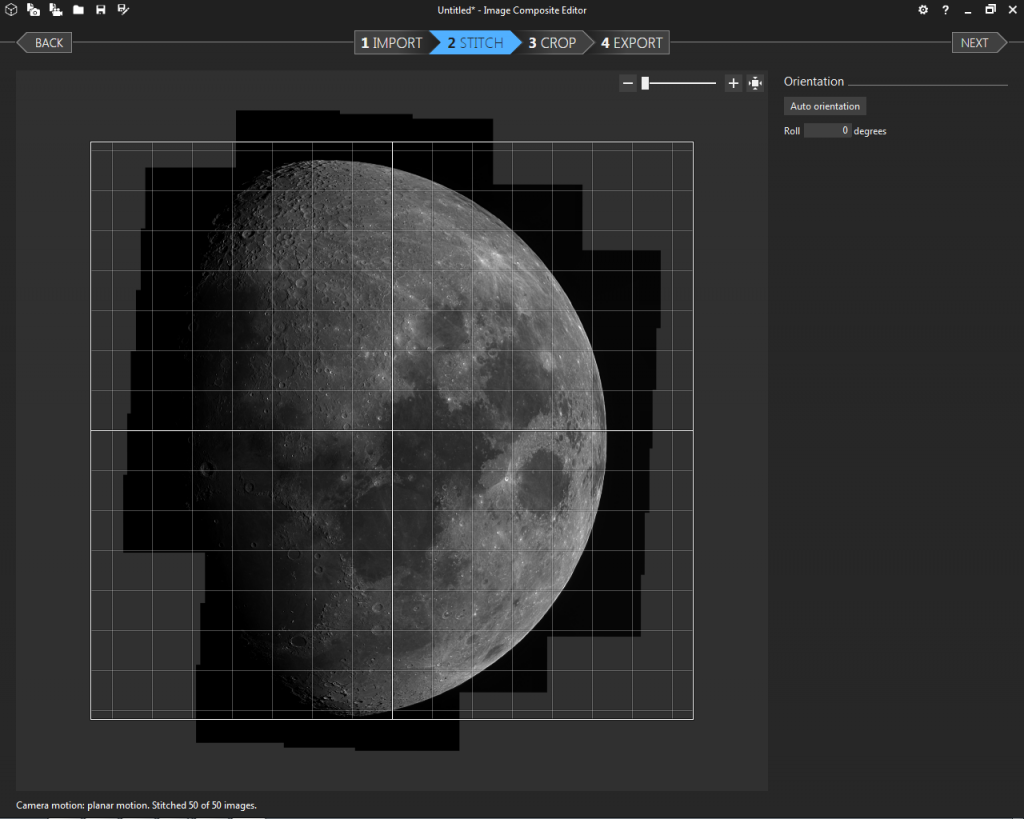 Vesion 4.8 of DSSR fixes the Object not set to an instance of an object error that arose out of nowhere on some users’ PCs, including my garage PC.

Not sure what caused it to suddenly appear after years of working OK – maybe a Windows update?

Anyhoos, a big thanks to Andrew Cool of SkippySky for helping me sort it out.

New European tax rules mean that it is no longer viable to sell my software online. Therefore, all my astro software is now freeware and is available in Downloads.

Clear skies and enjoy your holidays!